28.07.2021 Warehouse delays:
Due to congestion and backlog in warehouse. Processing of new orders changed to an average of 7-10 days. Appreciate your understandings.

Where is my VIN?

How to make order ?
What is Part number ?
Where is my VIN ?
Questions and Answers

What is a VIN?

VIN (vehicle identification number) is a unique code consisting of 17 digits. The code is assigned to the car at the time of release and is the same until the last days. Documents can be changed, but the VIN must be the same by law. However, it is worth mentioning that between 1954 and 1981 there were no standards for VIN numbers, so the number of characters was different.

Where can I find the VIN?

As a rule, it is duplicated in several places, so that even in the case of a severe accident, the car was identified.

You should search for VIN: 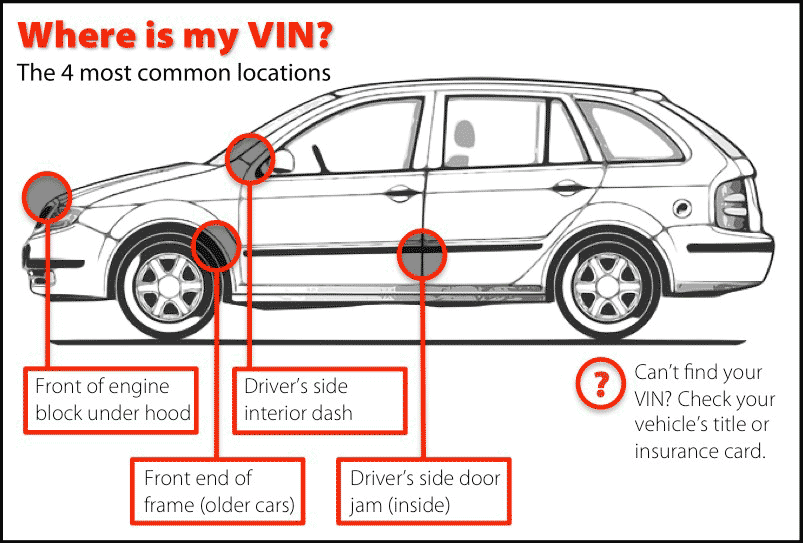 Some models have VIN in other places in the car. The easiest way, of course, is to look at the documents, in particular in the certificate of registration of the vehicle, this code must be entered.

Why do I need a VIN?

The VIN is checked during the annual technical inspection, as well as when registering the vehicle. This can also be checked by police during routine roadside checks.

The VIN is also useful when deciphering the specification of this product, as well as when purchasing spare parts from a car wholesale store. It will be much easier for the seller to match this information with the identification string.

Differences in a particular model are usually the result of different specifications for specific markets. For example, it may turn out that this component from the American counterpart has a width of 2 millimeters, and it will not be possible to mount it in your copy.

What is a Frame/Chassis code and where you can find it?

The Frame/Chassis is the identification number of a car. It is mostly used in Japan domestic market vehicles and some other Asian countries, as well used in Right Hand Drive vehicles. The frame is the unique identification code of your car. Frame/Chassis, just like the VIN, stores all the necessary information about the car such as the date of release, information about spare parts, and more.

How does it differ from VIN?

Where the frame code is located?

The Frame/Chassis code is mandatory, and the frame code is specified both in the documents of the vehicle and on the car itself. So, it is located on a plate, which you can find easily under the hood of the car and other part shown as on the example below. 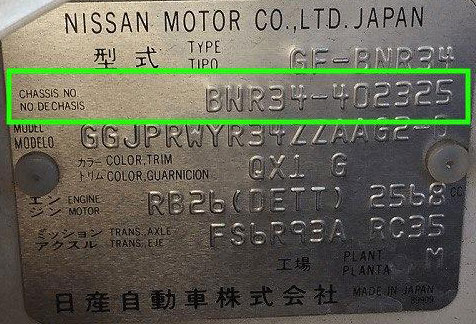 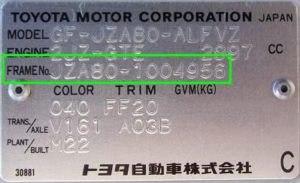 How to encode VIN?

Internet is filled with services for reading VIN, so it is absurd to spend time on its decoding. However, the basics are worth knowing. By ISO standards number consists of 3 parts.

The first is the WMI global symbol that identifies the manufacturer. The code consists of three characters (letters or numbers) and is provided by the relevant country office in consultation with the international organization for standardization ISO, where the group is headquartered.

From the first three characters of the series, we read the country of origin of the car and the manufacturer.

The second section has the abbreviation VDS. It has six characters (the last 4 digits) that allow you to read the general characteristics of the car. It may contain the body type, engine type, vehicle model, airbags, or protective electronics.

VIS collects the last eight characters. In this group, we will find information about the year of production of this car, as well as about a specific factory. This is especially important among manufacturers that have factories in different countries and on different continents. The knowledge gathered over the years will allow you to assess during a visual inspection of a used car whether it is worth buying.

Some cars didn't have a VIN in the factory. These include some special cars or military vehicles. To be able to legally navigate them on the roads, you must pass a check and pass all instances for issuing a plate with a number. The situation is similar to the one with the faded illegible sign.

But for your convenience, you can also divide the VIN into 5 parts:

What if VIN consists less than 17 digits?

Firstly, check everything again, maybe you just made a mistake. But if you check the license plate again and realize that there are only 17 characters, it means that the car was manufactured before 1981. And in this case, you need to understand that the information that you can find out about the car will be limited.