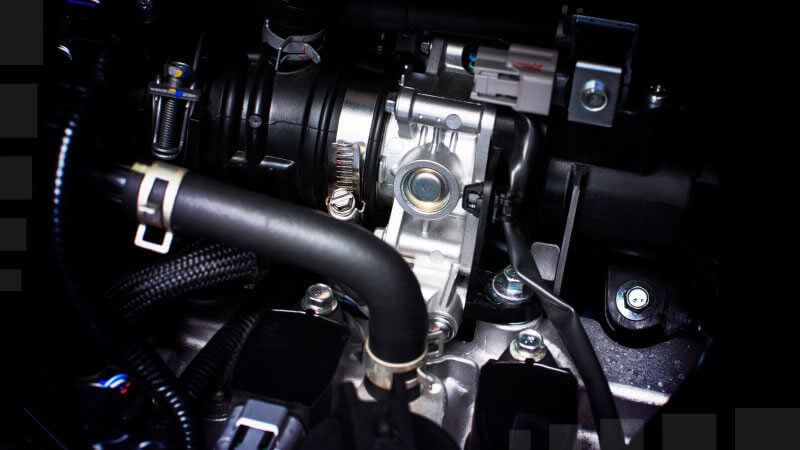 TBI is one of the options for injecting fuel into an ICE. Its characteristic feature is the supply of fuel to a chamber common to all cylinders. In this chamber, the air-fuel mixture is mixed and directed to the open cylinder.

Modern cars are divided into carburetor and injection ones according to the design of the fuel supply system to the ICE. But there is also a third option for the fuel system - throttle body injection (TBI). At one time, it became an intermediate generation between the first two, so it had both disadvantages and advantages in work.

How did this fuel injection system appear? In the early eighties, many American automakers began to put their engines on a "diet" with low fuel consumption. The carburetors gradually disappeared from the scene, and they were replaced by a new fuel delivery system - TBI. 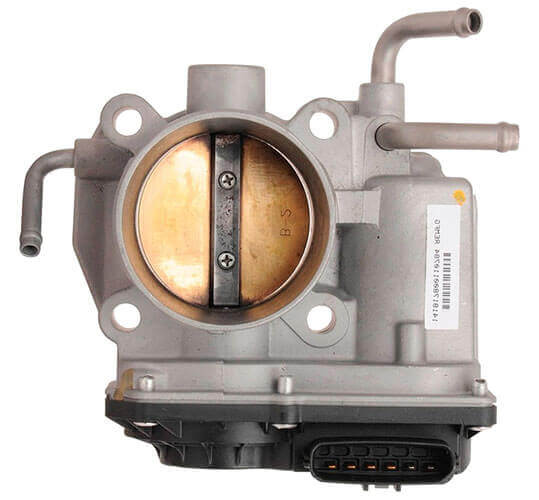 TBI was developed and put into operation in the process of car manufacturers moving away from carburetors. First, they invented the single-injector system, and later the multipoint injection for each cylinder is now used.

The device is mounted on the intake manifold and has one or two injectors in its structure that control the fuel supply. Smaller engines were equipped with one injector, larger engines with two injectors. The injector is based on a solenoid, and its electric current is controlled by the car computer depending on the currently required fuel supply.

As in the case of the carburetor, fuel is injected towards a central point in the middle of the manifold, where it is atomized, mixing with the incoming air - thereby creating a mixture that then enters the cylinders.

Throttle body with two injectors. Initially, such a device was in the design of engines of luxury cars (mainly in the six-liter eight-cylinder Cadillac engine of 1980), and then gradually penetrated cars of other segments, as it was very cheap.

Currently, the production of cars with one fuel injector is not conducted. However, you can find a relatively large number of old-made cars working on this principle.

By 1982, all General Motors A-bodied cars (Chevrolet Citation, Pontiac 6000, Oldsmobile Cutlass Ciera, and Buick Century, i.e. GM's top-selling sedans) came standard with 2.5-liter four-cylinder engines with TBI units. Ford and Chrysler soon followed suit, and by 1985 an injector throttle mechanism was either standard or optional on most car models on the US market.

With relatively few moving parts, the throttle body fuel injection unit earned the recognition and trust of numerous car enthusiasts: it rarely broke down, and the reliability was very high. Many manufacturers continued to use TBIs until the mid-nineties on small truck engines, which is significant.

How does the single injection system work? 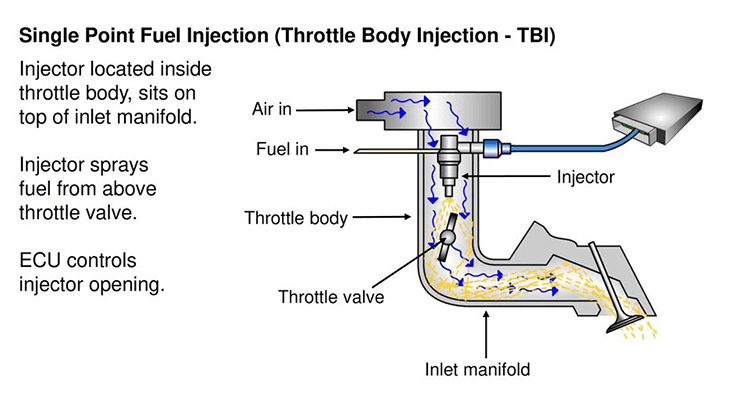 In the operating cycle, the nozzle, made in the form of an electromagnetic valve, provides a pulsed injection of fuel. Its design usually includes a spray nozzle, a check valve, a return spring, and a solenoid. The airflow throttle valve is electrically or mechanically controlled.

Pros and cons of TBI

The main advantages of using TBI to supply fuel to the engine are:

At the time of its introduction, TBI became a system that made it possible to "put" many people, far from understanding the internal processes of the car, behind the wheel. The fuel mixture is now automatically controlled, reducing fuel costs, improving efficiency, and reducing engine wear. Previously, in the era of carburetor engines, fuel consumption depended on settings that had to be manually set and adjusted depending on driving style, road conditions, engine behavior, and other factors.

But today, mono injection is an outdated technology that loses to systems with distributed fuel injection in almost everything:

On our website, you can not only buy the spare parts you need but also read about each of them.

For diagnostics, repair, and adjustment of a TBI, special equipment is required, which is in most cases impractical to purchase for garage use, and here you can find a large assortment of quality spare parts for your TBI system.

For this process, you will need a can of special fluid that is designed for this purpose. They contain a special solvent. So, you will need to first remove the air corrugation, and then the nozzle itself. In this case, you need to be extremely careful. And then just flush through your unit.