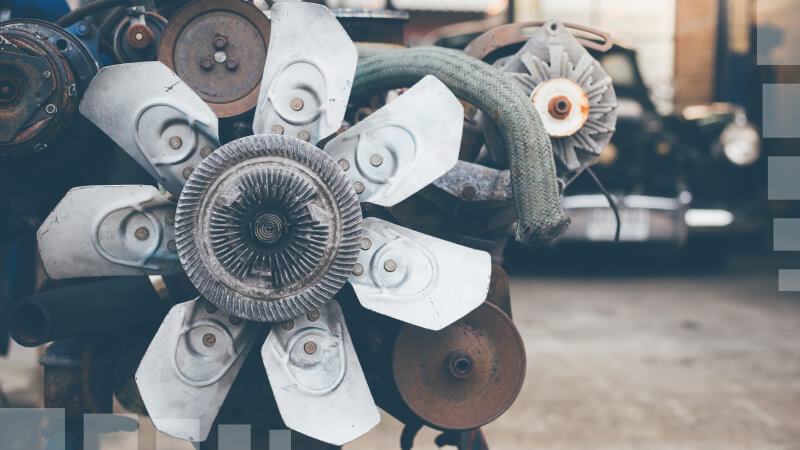 When your engine overheats, or you have problems with the cooling system, first, you look under the hood. Very often, the cause of overheating is a faulty fan. The fans either ignore the commands you give them or just don't turn on, but why does that happen? Most likely, this may be a problem with the fan relay.

In this article, we will understand what the fan relay is responsible for, the principle of its operation, how to detect a fault, and how to fix it. But first, let's talk about the cooling system as a whole.

The engine cooling system was invented to maintain the optimum temperature in this device, at which it is possible to drive the car. After all, not everyone knows that the temperature inside the cylinders often rises even up to 200 °C, although, on average, it ranges from 80 to 90 °C. But be that as it may, without an additional cooling system, the "body" of the engine is not able to withstand such a sharp heat. Even if the engine was in a thoroughly cold state, after starting it can become very hot in a matter of seconds, which can damage both its parts and cause deformation of the entire engine box. If we talk about the cooling system as a whole, then it has two very important purposes:

The fan, as part of the engine cooling system, works in conjunction with other parts of this system. However, the fan is included in another system, which, in the simplest case, consists of three components:

- relay for turning on the fan.

The principle of operation of such a system is extremely simple: while the engine temperature is low, the fan does not work, but as soon as the coolant reaches a critical temperature, the temperature sensor immediately triggers, and the relay turns on the fan. When the motor cools down, the relay switches off the fan again on a command from the sensor.

Often, instead of one, two temperature sensors are used, installed at the inlet and outlet of the radiator. The moment when the fan is turned on and off is determined by the difference in the readings of both sensors. And in many modern cars, the fan is controlled by an electronic unit that monitors not only the coolant temperature but the crankshaft speed, airflow rate, throttle opening, etc.

To improve the efficiency of the cooling system in the car, two fans are provided at once. They can work both together and separately; the fans are controlled by an electronic unit.

Also, many cars have a fan-free run function: the fan, upon a signal from the control unit, turns on after the engine stops and runs for a while, providing better cooling of the heated engine when the coolant circulation stops.

What is a fan relay, and what is it for? 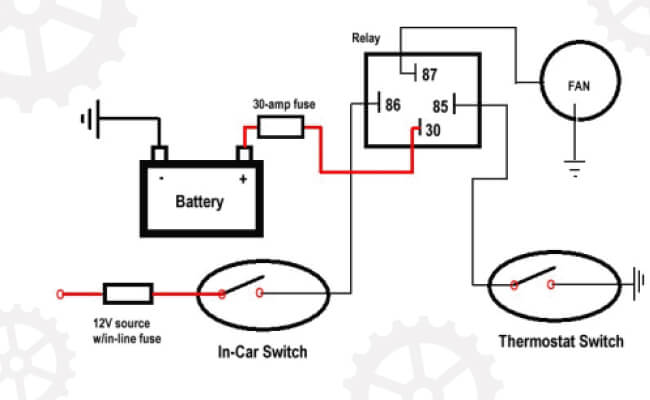 The simplest electromagnetic relay consists of an electromagnet (coil), an armature, and connecting elements. When an electric current is applied to the coil, it attracts an armature with a contact, which closes the circuit. To illustrate all this, take a look at the picture:

What does the fan relay in the car do? When the engine running temperature approaches a critical level, the vehicle computer or temperature switch applies current to the control circuit in the cooling fan relay. Further, the electromagnet attracts the anchor. In this way, electrical current flows through the relay and reaches the cooling fans.

Usually, there are three fan relays in the car - one low-speed relay and two high-speed relays. These relays are live under the hood of your car, very often near the accumulator. On your relay box, they will be signed as Rad Fan 1, Rad Fan 2, and Rad Fan 3 respectively.

Which indicates a fault in the fan relay?

If your car has these symptoms, you should check the fan relay:

The fans don’t start. This problem follows from the first. If the fan doesn’t work, it won’t cool the radiator. After a while, the coolant will start to heat up and won’t be able to take heat from the engine. In this case, it is most likely the problem will be in the relay as it supplies power to the fan, and without power, it won’t be able to work.

The air conditioner does not work well or does not work at all. Most likely, the problem lies in the damage or obstruction of the highway. This pipe is a very fragile thing. Corrosion, unprofessional repairs, and poor quality components can impair the transport capacity of the system.

But if we return to our topic, then you may not immediately notice that your engine has overheated, but if your air conditioner has stopped working - you should think and check if your fan is running.

How to identify a malfunctioning cooling fan relay 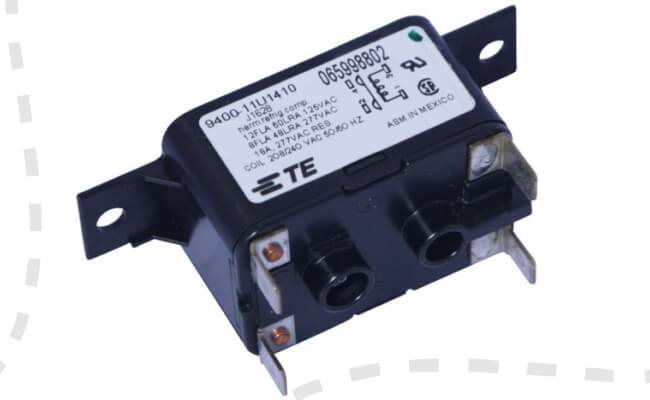 So, a quick and easy, but not very reliable, way to test a relay to see if it works at all on the switch side. Start your car and listen carefully to the relay. If it clicks, but the fan still does not work, then the problem is in the relay contacts. If the click isn’t heard, then the problem is in the electromagnet or the power supply of the relay, or it is a problem with sensors, etc. But this method is unreliable because it is difficult to hear this click, and it can mislead you.

Another fast and easy way would be to simply replace your fan relay with another one, for example, with a horn relay. The main thing is that the numbers on the relays must match. If, after replacing the fan, it worked, then the problem is in the relay. If the fan, all the same, doesn’t work, the problem can be in other system components.

If it isn’t possible to replace the relay, you can use special testers that will show whether the relay is working or not.

You may know that the problem is in the relay contacts, but how to check which contact is not working? Use a special relay kit, where you put the relay on the top of it, and then you have the tests on the side. You can plug this in the relay socket and check on each contact if there is power.

Or you could even use a fused jumper harness, and if you jump the two terminals, you’re going to see that fan is turned on.

Okay, what to do if you are sure that the problem is in the relay? It is pretty easy; just remove it on the working relay. They are quite cheap, and in our parts store, you can find any parts of the engine cooling system, including the fan relay.

The relays are located in the same place as the fuses: in a special mounting block. Often, it is next to the accumulator.

Fan relay for any car for an affordable price you can find on our website PartSouq.

The main reasons for relays not working are failure of the computer, temperature switch, or relay control module that turns the relay on or off. Damage is caused by switching between circuits at different speeds and electrical loads

Besides a malfunction of the fan itself, an incorrect relay can cause a short circuit or a power surge; this can destroy the entire electrical system of the vehicle.