The very first climate control systems for cars appeared before the Second World War. This option cost as much as one third of the car. In 1933 in the United States, these devices were already considered an integral part of living quarters. But it wasn't until 1936 that engineers began developing air cooling systems for various vehicles. The first air conditioning systems appeared in road trains for passengers. The principle of operation of an automobile air conditioner was the same as in refrigerators. It has not changed today. However, few people know what this system is.

The most important word in the concept of "car air conditioning system" is the word "system" itself. This means that it consists of several elements, and like most other systems, these components must work, and they must interact with each other. In this article, you will find out what parts are needed for the correct functioning of air conditioning. Thus, you can find out for yourself how the system works. In addition, the information provided contains practical advice for keeping each part of the air conditioning system in good order. In conclusion, you will be presented with data on how to understand that the air conditioner is faulty and how to eliminate the reason for the problem.

What are air conditioning parts? 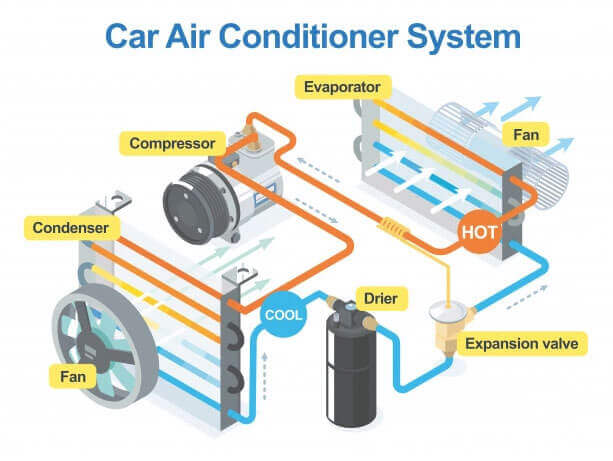 In modern passenger cars, the AC has both "manual" and automatic control (climate control). Regardless of how the AC is controlled, its structure is the same in the first and second cases.

The air conditioning system consists of such parts like:

Automatic air conditioning control differs from mechanical control by the presence of a processor that follows a preset program for the air temperature entering the car. Control over the temperature in the cabin is carried out through changes in the fan speed and angles of deflection of the dampers; in addition, when there is no such need, the automation can turn off the air conditioner compressor.

The air conditioner's operation is based on the property of freon to absorb heat during the transition from a liquid to a gaseous state and to release it during the reverse transformation. This is if you explain the process of the system briefly. In fact, air conditioning parts have a fairly large process, but it is not complicated in its understanding.

It is a rather complex, accurate, and, as a result, expensive mechanism. The compressor is very "afraid" of dirt, liquid freon on the suction side, "dry" operation (without or with insufficient lubrication), too high pressures (over 30 bar), and high (over 90 °C) temperatures. The accumulated dirt (mechanical impurities) in the system leads to very rapid wear of the compressor, and it will be impossible to repair it.

Some steps you can take to improve cooling and extend the life of your condenser is to keep it clean. Use moderate pressure garden hoses to clean the surface and remove insects, debris, and road grime. Or ask the car wash employees to flush your car's radiator, just be sure to tell them to adjust the water flow. Otherwise, high-pressure water can squeeze the condenser fins.

The evaporator is the second heat exchanger in your vehicle's air conditioning system. It is located either directly at the firewall of your car or inside the car’s interior. This is the knot that makes the air cold. The evaporator is one of the largest compressor oil storage locations in the system. This is an essential factor in solving problems associated with the contamination of the car air conditioning system. The acids that form in the system mix well with the cooling oil. And if the evaporator contains a lot of such oil (usually 0.08-0.118 l), then it turns out that it contains a large amount of highly corrosive acids. This can lead to premature failure of your vaporizer.

Also, the drainage tube of this part for air conditioning often becomes clogged with dirt that gets through the air intake (leaves, poplar fluff, etc.), and the evaporator becomes the main breeding ground for bacteria, spores, and mold. Over time, they can become the source of a truly disgusting odor. One of the best odor control products is to use products that help decontaminate and clean the evaporator and that are applied to the surface of the evaporator. Spraying the ventilation ducts will only mask the problem without solving it.

Your system has one of these parts for air conditioning. Since they serve approximately the same function, the terms dehumidifier and accumulator are often used interchangeably.

Functionally, they do the same job. There are no preventive measures for them. However, during maintenance, they are often left unattended. Yes, they cost money, but repairing a car air conditioner without replacing the filter drier is like using old oil filters on a new engine after replacing an old one. Sounds absurd? Yes. Does this happen every day? Yes, it happens, and much more often than people say.

Why is it so important to replace the filter drier?

For starters, see them as simple filters. Any filter, no matter what design, has a service limit. When your filter drier is clogged (by dirt from the system, corrosion, or moisture), the entire air conditioning system can be compromised because one element of the system is not functioning. Considering that the weight of moisture absorbers is getting lighter and lighter, it is recommended to change the filter driers every 3-4 years, even if the system has been working without interruptions.

How do the parts of the air conditioning system work together? 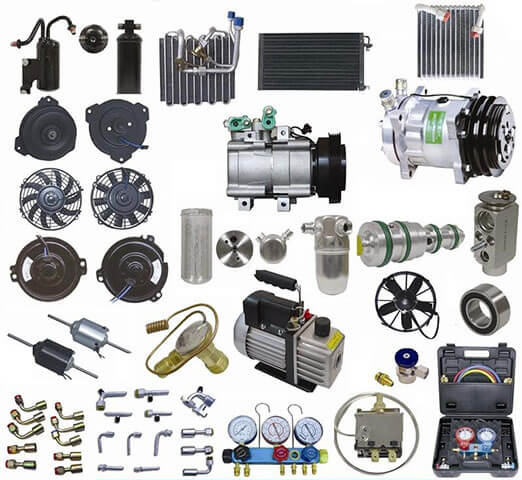 The operating principle of the air conditioning system is quite simple:

As you can see, everything is pretty simple. And this "refrigerator" would work like millions of household refrigerators for tens of years without any repairs, if not for constant vibration, temperature changes, humidity, and harmful environment.

Due to the fact that the device operates in rather difficult conditions (dust, dirt, vibrations, etc.), the air conditioning system is not insured against breakdowns. Most often, car owners are faced with the following manifestations of air conditioner malfunctions:

These symptoms can have various reasons. Therefore, it is necessary to diagnose the device. First, you should collect basic data on the operation of the air conditioner. For this:

Diagnose the airflow and other parts for air conditioning

Diagnose the air temperature and next parts for air conditioning

Self-determination of a malfunction is not a reason to cancel a visit to a specialist. We hope that our article has clarified the parts of the air conditioning system and you will help keep them in proper order. In case you are looking for parts for air conditioning, you can take advantage of our convenient service.

The basic principle of an automobile air conditioner is the ability of liquids to absorb heat during evaporation and release it during condensation. That is, the car air conditioner absorbs heat by the evaporator (cools the interior with a stream of cooled air) and releases it into the environment where the condenser is located.

The most expensive part of an air conditioner to replace and repair is the air compressor. However, prices vary from store to store. For example, on PartSouq, you can find parts for air conditioning at affordable prices.