What are the effects of having a hole in your muffler? 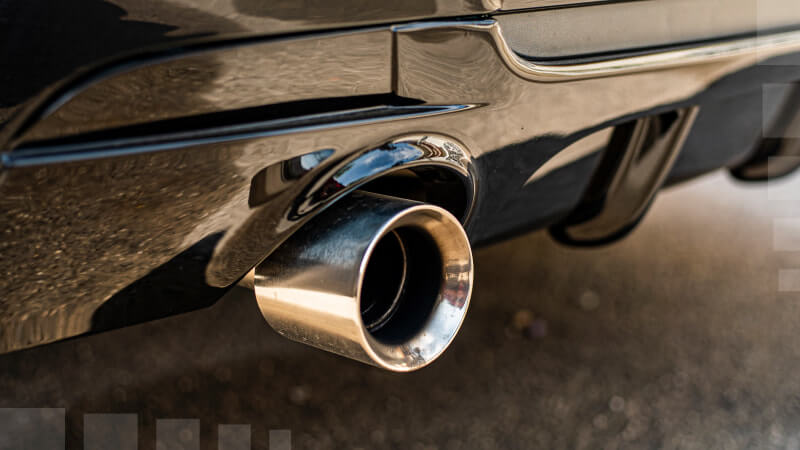 Muffler problems are well known to every motorist. All types of mufflers serve only a few years before the appearance of holes, which in turn leads to the release of exhaust gases, greatly increasing the volume of the sound of the engine. The parts of the exhaust system start to operate critically due to exposure to high temperatures, pollution, and vibration. With its outward simplicity, the muffler is very complex and designed for specific working conditions for each vehicle. The exhaust system consists of an exhaust manifold, a "can" that most quickly deteriorates, an exhaust pipe, and a catalytic converter.

This unit is not included in the schedule for regular replacement or inspection. However, car owners should learn how to identify signs of a muffler malfunction. A defect in the device increases the degree of noise pollution. In addition, there is a threat to the health of the driver and passengers.

In this article, we will talk in more detail about the causes of the appearance of holes in the muffler, the consequences, and how to identify problems.

What is a muffler in a car and what is it for?

The rear muffler has mainly a noise suppression function. But let's first talk about some parts of the exhaust system, and overall about that.

The exhaust system, contrary to popular belief, is very important in a car. Its functions include:

In common, the exhaust system is almost always called simply "muffler", neglecting other parts. But this is not entirely true, since the muffler is just one of the components of the exhaust system. The exhaust gas removal system consists of:

How is the muffler built? On older cars, the "reflector" type was used. Numerous so-called acoustic mirrors are made in the muffler housing. When a sound wave is reflected, some energy is lost. There is a whole labyrinth of acoustic mirrors in mufflers with a reflector design. Therefore, at the output, the sound from the engine operation is significantly reduced.

Why can a hole appear in the muffler? 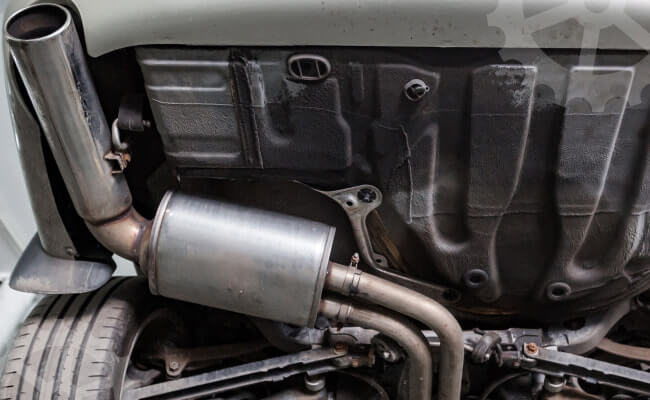 Since the mufflers have almost no protection against the influence of the external environment, it is made of durable materials so that its service life is longer. Road quality, obstacles, and even simple rock bounces damage the muffler.

However, mechanical influence is not the most common cause of breakdowns. Mostly chemical corrosion leads to breakdowns. The environment in which the muffler operates can be called aggressive. Because water, snow, as well as various reagents, to protect roads from icing, get on its body. All this sticks to the surface and leads to burnout of the muffler.

A hole in the part appears due to the ingress of water inside the muffler, which occurs due to condensation, as a result of which acids are formed. When exposed to high temperatures, corrosion occurs, destroying the part from the inside.

Ultimately, holes appear in the mufflers, which are made by rust, or because of the very obstacles on the roads. If the damage is serious, the muffler is usually replaced. But if the breakdowns are small, then one of the ways to repair them is used.

How to understand that a hole has formed in the muffler? Several signs indicate that your muffler has a breakdown:

The most common symptom of holes in the mufflers is a very loud driving noise. This is logical since the muffler dampens the exhaust sound. And the longer you don’t repair the muffler, the louder the exhaust sound will be, as the hole will be widening all the time. Therefore, as soon as you hear that the car is going louder - examine the muffler, most likely there is a hole in it.

When such a problem occurs, the engine with the carburetor often stalls, and there is also a loss of power. The fuel from the "broken" cylinder enters the exhaust system. The smell of fuel, the characteristic pops, and gunshots in the muffler indicate a misfire.

If the engine is an injector, the malfunction is easy to notice by similar signs and a noticeable shaking of the car. Additionally, the error is stored in the memory of the electronic control unit and is displayed as a special check icon on the dashboard. Sometimes the system automatically shuts off the fuel supply to the "conflict" cylinder. Misfiring can be caused by a hole in the muffler or any part of the exhaust system.

You can't just find out how much carbon your car emits. To do this, you need to pass a special test. In some countries and states in the United States, this test is required. If you fail this test, there may likely be a hole in the muffler.

What is the threat of a hole in the muffler? 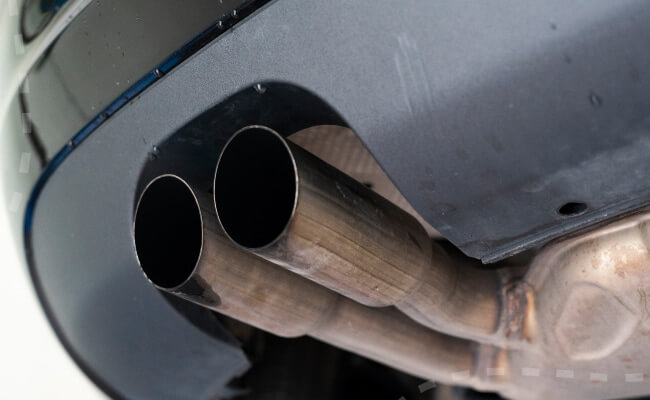 If the muffler "burned out" and a hole has appeared in it, then there is a threat of hazardous fumes, in particular, carbon monoxide, getting into the car interior. This gaseous substance is a product of fuel combustion. Even short-term exposure to this gas leads to nausea, headache, dizziness. With a long stay of people in such an environment, loss of consciousness, death is possible.

In most cities, large settlements, residential areas, rules are established that contain requirements for the level of loudness of sounds emitted by faulty exhaust devices. If signs of a muffler malfunction are identified, but not eliminated, the driver may be fined or denied service until the breakdown is repaired.

If the exhaust gas outlet is damaged, the degree of ride comfort is reduced due to the penetration of unpleasant odors and excessive noise into the passenger compartment.

It is also possible for condensation to appear in the mufflers if there is a hole in them. The presence of moisture in the muffler can lead to complete damage. With a little luck, moisture can react with exhaust gases and other substances, creating acids that will corrode the muffler shell and create new holes.

In addition, harmful substances enter the atmosphere, thereby polluting it. This is contrary to the rule of sustainability.

Where to find and how many costs a new muffler?

As soon as you find out that your car has a hole in the muffler - urgently go to the service station. Sometimes the muffler can be simply welded. But it often happens that there is nothing to help him, and you need to buy a new one. On the PartSouq website, you can find a wide range of mufflers for any vehicle at an affordable price. In addition to mufflers, you can find other spare parts of the exhaust system for any car. We hope that we will become good friends and guide you to the world of car parts.

What are the effects of having a hole in your muffler FAQ?

Actually, no. Loud exhaust does not consume more fuel. If your exhaust is louder than usual, then you should look at your car's muffler for holes. If there is one and you do not know what to do with it - read our article about holes in the muffler.

By their design, they can be divided into the following types: