Nowadays, automatic gears are growing more widespread. This popularity is quite understandable; it is much more convenient in everyday use, and many of their problems of the first years of release have long been resolved. Improved automatic transmissions can be extremely fast (gear changes in 50-60 ms as in Porsche) and extremely efficient (not inferior in fuel economy to standard transmissions).

A lot of car enthusiasts clearly cannot master the "mechanics" and subtleties of gear shifting, so they, without hesitation, switch to vehicles with an automatic gearbox. But here, you must bear in mind that these parts can be different, and each type has its own features. That is why when the question of choosing a vehicle comes up, many usually think about which transmission to give preference to. Previously, it was a little easier since the decision was based on only two varieties of this automobile part an automatic transmission or a mechanical one.

So what are the automatic transmissions? What are their differences?

There are different main varieties of automatic transmissions:

Consider the features, profits, and drawbacks of each kind of such essential part as automatic transmissions that are available today for sale.

This model is based on a double shaft, which is not in the mechanical one. In a conventional manual gearbox, all gears are mounted on the same shaft, while in a dual-clutch transmission, the first clutch transfers torque to the outer shaft and the second to the inner shaft. As a result, the first is responsible for even, and the second for odd transfers. In other words, it turns out that in one transmission, they are like two gearboxes while they work alternately. The transmission control function is assigned to the automation and hydraulics. There is no torque converter in DCT.

How did DCT come about?

The dual-clutch box, like many other inventions, came from sports, more precisely from the racetrack. The first attempt to create a double-clutch transmission belongs to the Frenchman Adolphe Kegresse. Back in 1939, the world-famous designer tried to apply his development to the legendary Citroen Traction. But, unfortunately, the know-how remained an unfulfilled project, never reaching the conveyor. Later, in the 80s of the 19th century, Porsche engineers still managed to create a gearbox capable of changing gears under power without releasing the gas. In racing, this invention has been incredibly successful, as even the fraction of a second that is lost when the speed is reduced during a gear change can decide the outcome of a race. Simply put, the turbo engines switched to higher gears without changing the pressure in the turbine without losing torque.

How does DCT work?

The principle of operation of the Dual Clutch is based on "anticipating" or preparing the next gear; for example, when you set off in first, the transmission had already started preparing the "second" gear. When a gear change occurs, the first clutch opens, and the second clutch closes. Parts of an automatic transmission monitor the gas pedal and assume that acceleration is taking place, accordingly preparing the next gear. In general, this type monitors not only the "gas" pedal, in addition to the accelerator, but it is also taken into account:

As a result, shifting occurs with lightning speed due to the fact that the clutches remain closed for only a few fractions of a second, and the motor continues to remain connected to the drive wheels without losing torque.

DCT is essentially a mechanic without one pedal, the clutch pedal. Both the automatic and the driver can shift gears utilizing the selector (gear lever) or with the help of special paddle shifters. 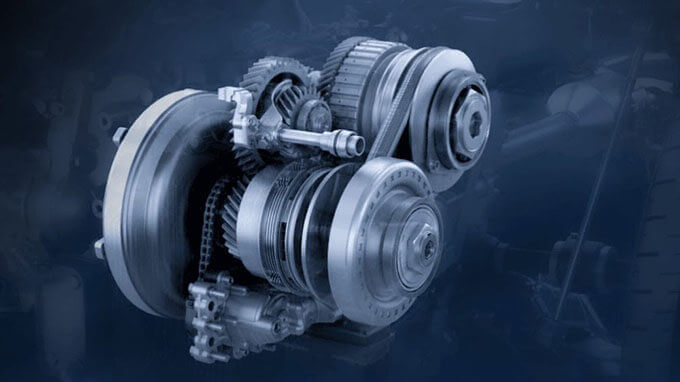 Such variety is often referred to as CVT. This automatic transmission has big differences over the previous type of this spare part. Technically, there is no such thing as "gear shifting"; that is why this gearbox has such a name. The gear ratio in such an automatic transmission changes continuously and smoothly, allowing you to "squeeze" the maximum power out of the engine.

How did CVT come about?

The first who thought about the principle of the CVT and created it was the most mysterious inventor Leonardo da Vinci back in 1490. But this notion was patented only in the 19th century (in its second half). It is noteworthy that the first operational vehicle with such a gearbox was created 500 years after its invention in the 50s of the twentieth century. For the first time, such a transmission was installed on DAF cars (at that time, the company was still specializing in car and truck creation). Later, a similarity of transmissions began to be displayed for sale installed on Volvo cars, but this type of transmission did not receive much popularity. But at the present time, CVT is in great demand and all because of its modern principle of operation.

How does CVT work?

In principle, the CVT, unlike AMT, does not have variable gears, which in turn means that when the car is moving, the usual jolts are not observed when shifting gears, and the speed gain has a smooth and precise course. The peculiarity of the work of parts of this automatic transmission on a car is a gradual change in torque on the drive and driven disc. The movement starts gently, unlike other types of gearboxes. Such work of automatic transmission parts in the car gives the impression that a powerful electric motor is installed in it. The speed is picked up smoothly, without the presence of extraneous noise. Therefore, the CVT does not need a gearshift switch, thanks to which the car accelerates much faster than with other transmissions. 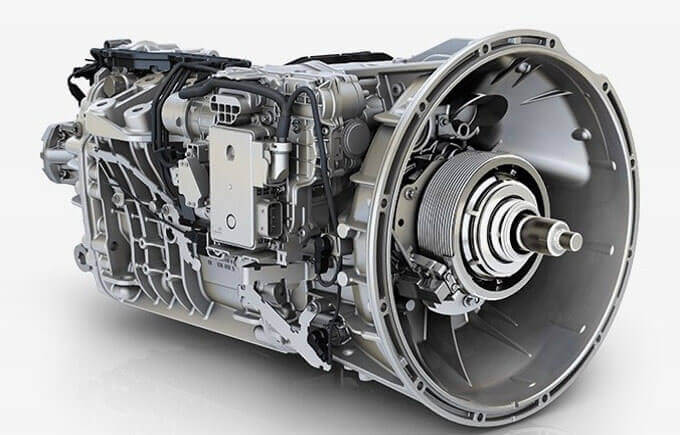 The next type is AMT. All automakers call it differently: Porsche Getrag (or PDK), Škoda and Volkswagen have DSG (Borg-Warner), Audi S-tronic. Structurally, parts of an automatic transmission are very similar to parts from a standard manual transmission. It has a clutch (or several) and shafts for transmitting power from the motor. In the case of a pair of clutches, one of them is responsible for the even gears, and the second for the odd ones. As soon as the electronics conclude that it is necessary to switch, the disc of one clutch opens smoothly, and the second, on the contrary, closes. The main difference from the manual box is fully automatic control.

How did AMT come about?

The first AMTs began to be installed on cars in the 1990s. In fact, such transmissions exhibited for sale were ordinary manual transmissions, but the gears and clutch in them were switched by hydraulic or electric drives. These units were installed on the cars of many automakers and represented a cheap alternative to the more costly automatic transmission parts. Today, automakers around the world are using the second generation of AMT, the so-called Direct Shift Gearbox (DSG). It is the peculiarity of the work of the parts of this sort of automatic transmission that allows you to get beneficial advantages while driving.

How does AMT work?

The specificity of the functioning of the DSG gearbox is that while one gear is working, the next one is already completely ready for a change. Let's consider its work on the example of the Volkswagen Group DSG gearbox. The box has two output shafts with driven gears and synchronizers located on them like the six-speed mechanic transmission of the Golf. The trick is that there are also two input shafts: they are inserted into each other. All of the shafts is joined to the engine via a separate multi-plate clutch. The second, fourth, and sixth gears are fixed on the external input shaft, on the internal- the first, third, fifth, and reverse gears.

Let's say the car starts to accelerate from a standstill. The first gear is engaged (the clutch blocks the driven gear of the first gear). The first clutch is closed, and the torque is transmitted to the wheels via the internal input shaft. The car starts moving. But simultaneously with the inclusion of the first gear, smart electronics predicts the subsequent inclusion of the second gear and blocks its secondary gear. Thus, two gears are engaged at once, but jamming does not occur; the drive gear of the second gear is located on the outer shaft, the clutch of which is still open. Due to this, ATM DSG works as quickly as possible, and even a professional driver will not be able to change gears so quickly on a standard transmission.

Which automatic transmission to choose?

This question cannot be answered unequivocally, but if you follow the trends in the auto industry, it is easy to see that the most promising manufacturers consider AMT with two clutches. CVT and DCT are in second place. But, we believe that the choice of transmission should also be based on the class of the car and who will drive it and how much. For example, if you prefer a relaxing driving style, then the classic DST will triple you, and if you like fast and aggressive driving, we advise you to pay attention to ATMs. In sport mode, their "rate of fire" can rival that of a real race car driver. And for a small car, a regular CVT will just fit.

Every type of automatic transmission has its own specific advantages and disadvantages. However, over time and technology development, problems with automatic transmission parts become less and less obvious. In addition, regular maintenance of the car should be carried out in order to get only pleasant sensations from the purchase. As a result, by purchasing high-quality parts for transmission, you can always be content with your choice to the fullest! Stay with PartSouq and monitor the condition of your vehicle properly.

Symptoms of a malfunctioning automatic transmission are:

Most often, the main reasons for automatic transmission failure are untimely maintenance in the form of oil changes, consumables, and improper vehicle operation. In the automatic transmission, worn internal parts fly, which in most cases change quite easily. For example, the most common failure is a control unit or torque converter. In this case, for repair, it is enough to replace the failed parts. To prevent this from happening, use proven transmission parts to keep the car in good condition. PartSouq is one of the few sites that has transmission parts for sale at affordable prices.